Over the years, I have written about several teachers who had clear impacts on how I learned and what I came to be as a man. (Assuming they would be willing to be associated with that)  Today, while checking out at the local grocery store, I was gazing over the tabloids/magazines and I spied the October 2016 edition of Reader’s Digest.

I immediately thought of Bernie Freeman. I then added the issue to my purchase. 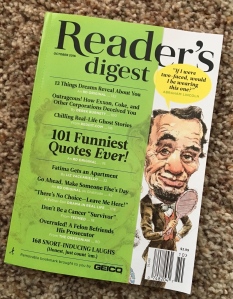 Bernie was my seventh grade English teacher. If my memory is correct,  it was 1972-1973, the first year the Warren Twp Middle School was open.  I was not a very popular kid.  I was tall, skinny, uncoordinated and always the last kid picked for sports teams. On top of that, my dad was the police chief in town, so I wasn’t considered cool.  I made up for that deficit by being a voracious reader.  No regrets and no hard feelings.

Mr. Freeman was a collector of Reader’s Digest Books and I suppose there were over a hundred of them on the shelves in his classroom.  Bernie nutured my love of reading, a short-lived interest in Latin  and also coached  me to winning the local and regional, Optimist Oratorical Contest. I recall  the theme that year was “Listen World.”

Bernie was one of the teachers I stayed in contact with until the time of his death in 2003.  Bernie, Ann Humphrey and myself would get together for lunch 2-3 times a year during most of the 1990’s, before I moved out of the area. It was my way of saying Thank you.    When we bought our funeral home in 1999, it came with a small library full of Reader’s Digest, Condensed Books.  Another reminder. 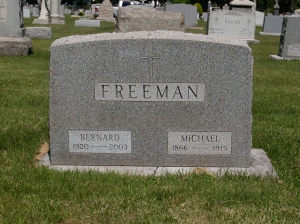 A few years ago, while home visiting my parents, dad and I took a trip to St. Mary’s Cemetery in Plainfield, NJ. We found Bernie’s grave and took  a photo of his headstone, which  hung in my office in Aiken for several years. It was a daily reminder of the importance of reading. . . and how a humble man can make a big impact.

May his memory be eternal and from perusing the issue, I’m confidant that you will find some material within  these pages in the near future.

Living between Aiken & Nashville, TN, USA, I like to share what I am looking at, thinking about or listening to. I refer to this as the view out my window. Thanks for stopping by.
View all posts by Ray V. →
This entry was posted in Gratefulness and tagged Ann Humphrey, Bernard J. Freeman, Gratitude, Optimist Oratorical Contest, teachers that made an impact, Warren Twp. Middle School. Bookmark the permalink.