Yesterday, I wrote Minor Distractions.   Not labled “Part I” as I didn’t anticipate a  “Part II.”

Sometimes,  reality  is stranger than fiction.  Consider this,  . . .

Today was the day I was leaving the beach to head home to meet with some folks regarding the sale (finally) of our home.  I loaded my car early and made breakfast for family and guests.  After being an extra-nice husband and cleaning up the breakfast dishes, there were hugs, kisses and “Drive safe, Dad”

I left with my coffee cup and I was on my way,  a half hour sooner than I had planned, building in some time for any traffic issues.

What it looks like when the power goes out in an elevator.

I was already conquering the almost three hour drive home.

At 0931, I stepped into the elevator on our 4th floor and pressed the button for the parking garage and away I went, for about ten seconds. Then all went black and I ceased to feel that sensation of going down.

I hate when that happens.

After almost a  minute of nothing,  I called my wife and she told me  that the power had gone out. I asked her to call the front desk and to let them know I was alone, OK, but in the elevator.

I then remembered the flashlight on the iPhone and turned it on, allowing me to become a bit  oriented.  There was a “emergency button” in the car control panel, but it went to the elevator manufacturing plant, who knows where.  They were going to dispatch a service tech to help me. (I suppose there is a battery for that intercom)

What it looks like when you use your iPhone flashlight

In the meantime, a text  from Jelly (nickname for our daughter Elissa)  updated me that most of the Island was without power and the front desk had called the fire department to “rescue” me.

I was just sitting on the floor of the elevator, drinking my coffee and checking e-mails (it was getting a little warm) when my phone rang.  It was the Hilton Head Fire Marshall, returning my call from yesterday about how I was concerned that the resort might not be following some basic safety rules and thus, putting their guests at risk.  We both got a chuckle about my current situation. 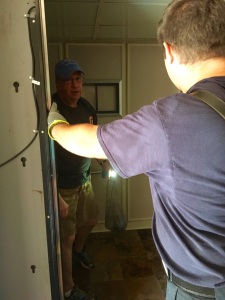 I could hear the “Jake Brake” on the fire engine as it pulled up and Jelly was texting me that she was taking pictures for the blog.  She knows me well.

I was stuck between the 2-3 floors and was able to verbally communicate  with my heros that I was a retired firefighter and OK.  After a few minutes, they were able to release the car so it went to ground level and I was able to make my escape.  I didn’t get much chance to thank the guys as they were making their way to another building and another stuck elevator, this one with a family, including a baby.

My wife and daughters,  pleased that I was safe, hugged, kissed and admonished me to drive  safely. Then I was on my way, 33 minutes after I stepped in the elevator.  Fifty six years old and it was the first time I was ever stuck in an elevator.

Thanks to Kyle and the rest of the guys from Engine 8, who were the second due Engine into the area while Engine 1 was tied up somewhere.

So ends my summer vacation.

Living between Aiken & Charleston,, South Carolina, USA, I like to share what I am looking at, thinking about or listening to. I refer to this as the view out my window. Thanks for stopping by.
View all posts by Ray V. →
This entry was posted in Minor Distractions, Uncategorized and tagged elevator rescue, Hilton Head Fire Rescue, Ray Visotski, summer vacation. Bookmark the permalink.