A chapter of my life concluded this morning, but I caught a glimpse of what the end of the book may look like.

A man who I had gotten to know well over the last nine years moved away today.

Our initial meeting can be described by that classic phrase, “Honey, he follwed me home, can we keep him?”

If Ron liked you, you always had something to do if you wanted to and sometimes even if you didn’t want to. 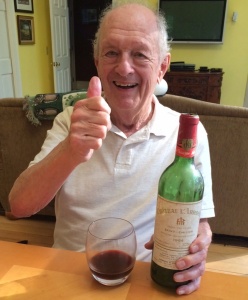 Ron, at dinner , our house for his 81st birthday, back in May.

Fiercly opinionated, Ron  owns more books and bottles of wine than anyone I know. Life was pretty black and white for him, at least during the years I have known him.  He was an enigma, wrapped in a puzzle.  Since we agreed on most topics (if two people always agree, one of them is not necessary) we gravitated and fed off each other’s enthusiasm for the same topics…our church, National politics and watching golf. . . always with a glass of wine.

His grown children live in far away states  as do my parents, and  I suppose it could be said that we adopted each other.

They wanted him to move closer to them, but he wanted to stay in his retirement  home, in Aiken.

As the years passed, his short-term memory and motor functions continued to show the wear and tear of eighty one years.  A few months ago, he drove his car for many miles with a flat tire, pulling in his garage on a rim… the car, never repaired, still sits in his garage. He  rarely asked about getting it fixed.

I guess he understood that chapter in his life was completed.

Still wanting to be independent, and not one to accept no as an answer,  arrangements were made for someone to come in for a few hours each day to be wth him and to take him around.  It improved his situation in some regards, but the progression continued and the man who could talk about many complex topics, often couldn’t remember what he had for lunch, or if he even had lunch.

I was becoming more of a back up caregiver than a friend. It was a role that I gladly accepted. I had almost daily contact with him.

I would take him to Mass on Sunday mornings and then we would stop somewhere for breakfast.  It was a routine that we both looked forward to.

My wife, being the nurturing person she is, started having me bring him to our home on Sunday evenings for dinner. It became another  routine for all of us. Watch golf, drink wine, eat dinner, go home.

Last week, we were going to be away on Sunday and we made arrangements for Ron to come on Saturday.  I picked him up and when we got to our house, he fell as he was walking up our front steps, hitting his head on the brick walkway and actually being unconcious for a few minutes.

An ambulance ride to the hospital, five hours in the ER and some tests was what it took to admit him and change the rest of his life.

He stayed in the hospital while plans were made for him to be transferred near his daughter’s family in the Philadelphia metro area. 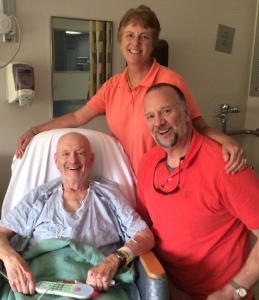 It has been decided that he has crossed the line of  no longer being able to live alone safely… in his house,  with his “stuff”. This was a concept that he fought and fought, but this week, he seemed resigned to what was happening.

I was away on business most of the week, but I stayed in contact with his daughter and daughter in law to get updates.

On Saturday, Alicia and I went to visit him, only the second, non-family member I have visted in the hospital in decades, (no one likes it when the undertaker shows up at your hospital room door, right?)

We talked about him going away to get some strength and balance back, but we didn’t get into all that, “this may be the last time we ever see each other stuff”

I regret  that I sanitized the conversation. I should have held him and cried for the fact that he became such a big part of my life and I was going to miss him.  I wanted to ask him how it felt knowing  that he was not going back to his house, but to a “rehab” facility that was five hundred miles away?

I should have told him  how scared and sorry I was that he was entering that final  phase of the thing we call “life”.  What was around the corner? 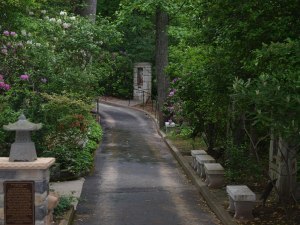 We nevcer know what is around the corner, do we?

Not only scared for him, I was scared  as this was a “Coming Attraction” for me as we never know what those last years, months and days will be like.

I kissed his head and walked away.

This Sunday afternoon, my house is eerily quiet as I watch some golf, sip some wine, cry and ponder life’s rules.

Living between Aiken & Charleston,, South Carolina, USA, I like to share what I am looking at, thinking about or listening to. I refer to this as the view out my window. Thanks for stopping by.
View all posts by Ray V. →
This entry was posted in Coming Attractions, dementia, Uncategorized and tagged Aging, Aiken Bloggers, Aiken SC, dementia, growing old, independent living, Ray Visotski, Ron Warren. Bookmark the permalink.