Saturday was the day we hosted the shooting of the “climactic” funeral scene for the movie, “Waiting for Butterflies…A Story of Redemption”.

“Mrs. Archer always said she was waiting for butterflies”…a quote from the eulogy. 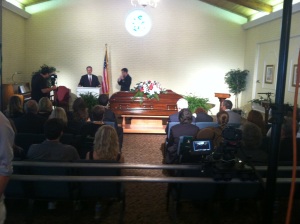 They re-arranged our chapel several times throughout the day

Allen and I were in bright and early, actually it was still very dark when we got to the office at 0630 to await the production staff and extras.

It is a great honor to be part of this event, which hopefully will be a benefit for our community. 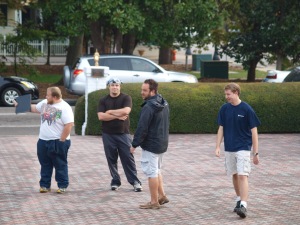 How the typical movie producer dresses for work…I am jealous.

I got to learn a great deal about making movies and they have lots of very expensive gadgets.

The production crew wraps up the primary shooting on Monday and then it is months of editing and all the other things they do before the movie premiers in May, 2013. 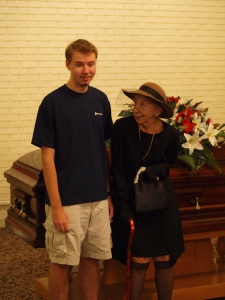 Evan Cook with his grandmother (and one of the original followers of this blog), Carla, who is dressed for the occasion, complete with knee-highs and a cane.

Evan Cook, a senior at Aquinas High School in Augusta, GA (and a classmate of our daughter, Megan) has served as an intern for the production crew, gaining valuable experience as he prepares to direct his first film, starting this week. He has been able to take a few days off from school so that he could gather experience and knowledge you just can’t find in a book. That is another interesting fact about this movie….much of the talent and production people for the movie actually come from Aiken, home of the highly regarded “Aiken Community Playhouse“.

New Daydream Films, based in Charlotte, NC did not come and just use Aiken for the backdrop to their movie…they engaged the community and the community responded and the result should be a great movie. 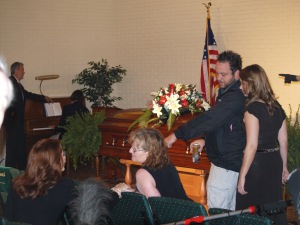 There is a lot of hurry up and wait in making a movie. Here they were waiting for a police officer to show up with the shackles. 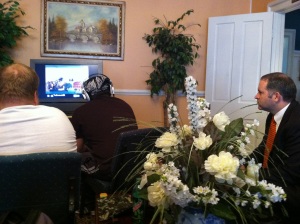 In the “video village” aka our main visitation room, Allen Bateman, (R), our other funeral director watches in between meeting with two families today, planning funerals.

It is also worth noting that the production crew crew was shooting a night time scene at a local eatery Friday night and they were only able to get 2-3 hours of sleep. This resulted in many of them catching 15-30 minute cat naps here and there. I took several pictures documenting their exhaustion, but none were too flattering, so I opted out of posting them. 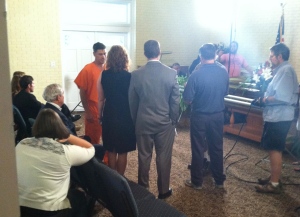 Lots of lights…I do not think there was an electrical outlet that did not have something plugged in it.

Seven hours later, they were cleaned up and gone…on their way to the next location for the next scene. Although they offered to help, I opted for us to figure out on our own, the puzzle of chairs, podiums and plants that earlier that morning was our newly decorated chapel.

Living between Aiken & Charleston,, South Carolina, USA, I like to share what I am looking at, thinking about or listening to. I refer to this as the view out my window. Thanks for stopping by.
View all posts by Ray V. →
This entry was posted in "roll tape" and tagged Aiken, Aiken Bloggers, Aiken movie, Aiken SC, Allen Bateman, Aquinas High School, Evan Cook, George Funeral Home, George Funeral Home & Cremation Center., movie production, New Daydream films, Ray Visotski, Waiting for Butterflies. Bookmark the permalink.